Whenever Nohemy Solórzano (now Associate Provost for Diversity and Global Learning at Westminster College) and I get together, at some point in the conversation we will hark back to her graduate school days here, and the time the other students and I left her trapped in a cubby hole above the stage in Puebla, Mexico while the rest of us had a prolonged talk-back with the audience to the play.  María remembers hating her character at first, then tolerating her, then coming to love her, while constantly having to remind audience members that she is not Raquel, that she was acting.  For several students, there was the thrill of getting a passport and leaving the USA for the first time—one student’s parents even travelled to the airport to say goodbye, and brought him a suit, because, after all: Who knows how people dress in Europe?  For me, it was the consternation of waking up from a dream in which I walked into rehearsal one day, only to find that the entire cast and crew had dyed their hair bright purple WITHOUT TELLING ME.

Nora Glickman’s “Una tal Raquel”, based on the true story of early 20th century whistleblower Raquel Liberman, was not—no doubt about it—the greatest masterpiece of Latin American theatre that I have been associated with among the 70-odd plays Teatrotaller has produced, but it was, as one reviewer wrote, “a heroic and harrowing tale,” an important story that needed to be told. It was also a play that marked my collaboration with the student group Teatrotaller in important ways.  Six years after the founding of the group, this was our first world premier production. It was the first time the group was invited to present a play internationally.  It is still the only play, to date, that the students and I lived with and performed in multiple locations over a period of more than a year.  It was, as several alums delight in reminding me, the only time we have performed “on Broadway” (it was at Barnard College, which has a Broadway address, albeit uptown).

Nora Glickman approached me with her still unfinished project early in 1999 and suggested a collaboration.  The theme of the play, on the trafficking of women, tied in closely with an extended collaborative research project I was conducting at the time in the border city of Tijuana, Mexico, and I was intrigued. I consulted with the students, since accepting the invitation meant that we would be performing the play in Belgium, and it would require a two-semester commitment from them. They enthusiastically agreed. Glickman came to Ithaca to give us some background on the historical figure, and we read through the still-under development play.  Then Cornell colleague Yael Halevi Wise helped us think more deeply about Jewish traditions and the history of immigration from Poland to Argentina.  Another colleague, from Ithaca College, provided advice about period music and the early tango/milonga styles.  The students travelled to do a weekend workshop on movement with a professional theatre director in New York City.

The students were delighted to have the opportunity to exchange thoughts with a recognized playwright, to learn about this period in early 20th century Argentina, to see some of their ideas find their way into the final script, to have their names and their pictures in the printed version of the play.  They were bemused by the very different responses of audiences in Ithaca, New York City, Belgium, Mexico, and flattered by how each performance spawned more invitations:  too many to accept, really.  The project eventually extended into Summer 2000, and could have continued in even more venues:  Israel, Argentina, Chile… but graduation of key members and the competing demands of other courses meant I had to call a halt (eventually, a later group of students would travel to Israel with a different Nora Glickman play, ten years later, in 2009).

“Una tal Raquel” marked a watershed for Teatrotaller, of pushing the group to perform at an international level, where Cornell non-theatre majors could feel comfortable alongside professional actors and students with dedicated conservatory training. Yet, while a strong final product has been, and remains, an important goal for all of us in the group over the years, my own interest is, in the final analysis, less for product and more for process—pedagogy rather than professional training. Nora Glickman’s play remains close to my heart for the opportunity it provided all of us—students and faculty—to work together in a concentrated, interdisciplinary way, involving research in several fields, collaboration on a complicated, long term project, and—why not?—garnering lots of applause and thoughtful feedback from our audiences, including distinguished Mexican novelist Rosa Nissan, who wanted us to stay on in Mexico and present the play at other venues.  She had bright pink hair at the time.

I told the students about my nightmare, but no one felt compelled to dye their hair purple, even in solidarity.  They all took the play too seriously.

About the Transformative Humanities Project

Faculty in the College of Arts & Sciences share a belief in, and speak often with our students, their parents, and the broader public about, the importance of the humanities for shaping deep and meaningful human lives. These short reflections by our faculty illustrate — in concrete and personal ways — how encounters with the stuff of the humanities have in fact been transformative in their own lives. In composing these reflections faculty were responding to the following assignment: Pick a single work in the humanities that has profoundly affected you — that inspires you, haunts you, changed the way you think about things, convinced you to pursue your life’s work, redirected your life’s work . . . in short, a work that has made your life in some way deeper or more meaningful. 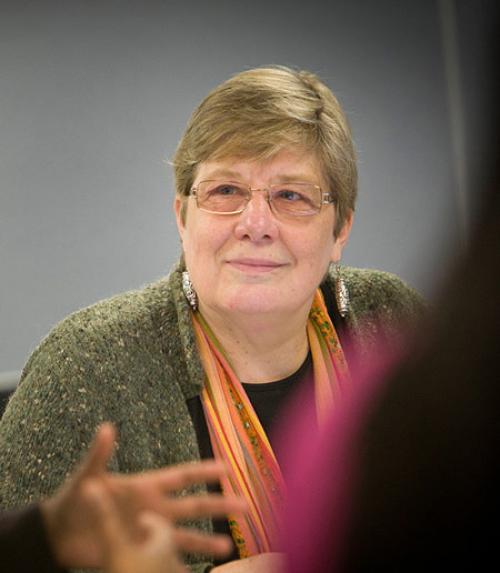