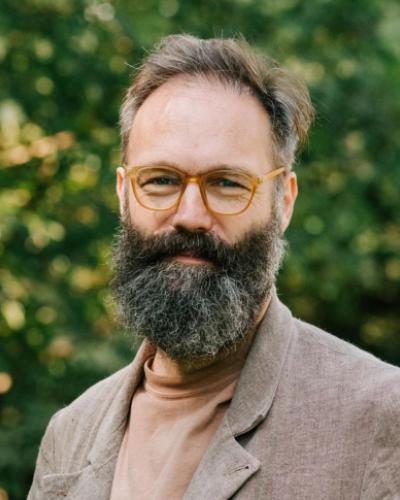 Pascal Schwaighofer is a visual artist who graduated from the Accademia di Belle Arti di Brera in Milan, a Mellon Graduate Fellow at the Society for the Humanities, and a Ph.D. candidate in the Department of Comparative Literature at Cornell University. His research is grounded in environmental humanities, visual culture, and critical theory. Starting from the material culture of apiculture, his dissertation project explores the modern Western fascination with honeybees and its transdisciplinary influence on linguistics, cybernetics, economy, and ecology. The thesis revisits the findings of Nobel Prize-winning ethologist Karl von Frisch (1886-1982) and Thomas D. Seeley, the Horace White Professor in Biology at Cornell University; it tracks the ontological and epistemological reshuffling prompted by von Frisch’s “Bee Language,” Seeley’s “Honeybee Democracy,” and the dramatic decline in pollinator populations worldwide. Against the backdrop of major ecological disruptions, Pascal uses the study of honeybees to probe the complex imbrication of neurobiology, tropology, and political concepts such as democracy and care.

Pascal has written “The Book Hive: A Material Metaphor,” an essay currently under review for the collection “Critical Insect Studies and the Long Eighteenth Century,” a special issue of The Eighteenth Century: Theory and Interpretation. In this essay, he discusses the epistemological implications of the hiving system designed in the form of a book and the visual impairment of its inventor, Genevan naturalist François Huber (1750–1831). In addition to his academic research, Pascal pursues a research-based artistic practice focused on the comparative strategies of technology and aesthetics. His artworks have been acquired by private and public collections and exhibited in major European museums, such as the Aargauer Kunsthaus (Switzerland); Kunstmuseum Luzern (Switzerland); Kolumba Museum (Cologne, Germany); MAGA museum (Gallarate, Italy); Centre Culturel Suisse (Paris, France); Center of Contemporary Art (Plovdiv, Bulgaria), and many others. In collaboration with art curator Jan Verwoert, Pascal is the author of Tulipmania, a publication focusing on the link between contemporary aesthetics and the abstract economy of tulips in the seventeenth century. He was awarded the prestigious Swiss Art Awards and the Manor Art Prize, Switzerland, and in 2019 he received a Production Grant from Cornell Council of the Arts and was awarded the Cornell University Comparative Literature Essay Prize.

Reparative Pollination: The Politics of Care in the Age of Disrupted Ecologies

Reparative Pollination: The Politics of Care in the Age of Disrupted Ecologies explores how the decline of pollinators and related plans for reparation rhetorically inform the ecological debate and reframe the relationship between humans and honeybees. Since honeybees, as domesticated pollinators, have emerged as an environmental signifier and offer a vantage point for monitoring purposes, the research aims to unpack the discourse situated between the Western fascination with honeybees and the apocalyptic scenarios predicting the double extinction of humans and pollinators. In conjunction with the reciprocal interest in cybernetics and apiculture, the project aims to probe the links among the dematerialization of honeybees (that is, the translation of bees’ behavior into algorithms), swarm theory, and the development of miniaturized, autonomous flying devices for reparative purposes. If the potential double extinction calls for a new politics of care, the unpacking of the rhetoric of reparation aims to shed new light on the ties between humans and nonhumans and between technology, domestication, and reparation.