When he died at age 50 in 2003, prolific Spanish-language writer Roberto Bolaño had only begun to achieve the worldwide recognition that has since come to him.

In the last six years of his life, Bolaño published critically acclaimed works, including “The Savage Detectives,” which established his international stature, “Amulet” and “By Night in Chile.” His reputation continued to increase after his death, most especially with “2666,” a 1,000-page book published in the original Spanish in 2004 and translated into English in 2008.

But despite the popularity and page counts of “2666” and other posthumous, award-winning publications, Bolaño is, at heart, “a novelist who began as a poet and never ceased wanting to be one,” writes Jonathan Monroe, professor of comparative literature.

In “Framing Roberto Bolaño: Poetry, Fiction, Literary History, Politics,” one of the first full-length monographs devoted to Bolaño, Monroe provides a context for understanding this writer. To grasp his achievements, Monroe argues, the reader must understand not only poetry and fiction, but also literary history and politics.

“I see in Bolaño a pivotal, generational figure for thinking through questions of genre in the last quarter of the 20th century and the first few years of the 21st,” Monroe said.

Bolaño wrote both poetry and fiction, but it’s not a simple division between his youth as a poet in Latin America and his maturity writing novels in Spain. Rather, Monroe argues, Bolaño was at once a poet and a prose writer, packing the power of poetry into non-verse, novel-length works in a genre Bolaño called “poemas-novela,” or as Monroe calls it, a “prose poem novel.”

Bolaño “smuggles” poetry into the epic “2666” – which is 898 pages in the English edition – and his other books, Monroe said.

“He was trying to free himself, and to free poetry, from the limiting constraints of poetry-as-verse, and of poetry understood as mere “self-expression. The ‘prose poem novel’ proved to be his path toward restoring poetry to its full capacity and literature to a full range of possibilities.”

Monroe has written extensively on genre, particularly on the prose poem, as well as publishing prose poetry himself.

Bolaño, who read voraciously, gained his knowledge of and capacity in prose poetry from Poe and others. Charles Baudelaire and Arthur Rimbaud, early pioneers of the genre, were especially strong influences, Monroe argues.

Born in Chile in 1953, Bolaño came of age as a poet in Mexico City during politically turbulent times. He returned to Chile briefly in 1973 to support the democratic socialist government of Salvador Allende. Political upheaval figures prominently in many of his works, with settings in both Europe and the Americas in “Monsieur Pain,” “Nazi Literature in the Americas,” “Distant Star,” “By Night in Chile,” “Amulet,” “2666” and others.

But more than this, poetry, fiction and literary history are political to Bolaño, Monroe writes. His prose poem novels test the limits not only of genre, but of “the systems and hierarchies of discourses and disciplines” that create division between poetry and fiction and between the aesthetic and the political.

“Literary criticism, history, theory are not the others of poetry and fiction, his work tells us, but inextricably bound up with them,” Monroe writes in his conclusion. Bolaño, who wrote prolifically during the tumultuous last two decades of the 20th century and into the 21st, leaves to readers and writers today a “poetics for the twenty-first century,” helpful for traversing the ground shared by literature, history, and politics.

“He has become in the past several decades one of the most written-about authors anywhere in the world,” Monroe said. “His readership and literary reputation continue to grow, and he continues to draw enormous critical and scholarly attention worldwide.” 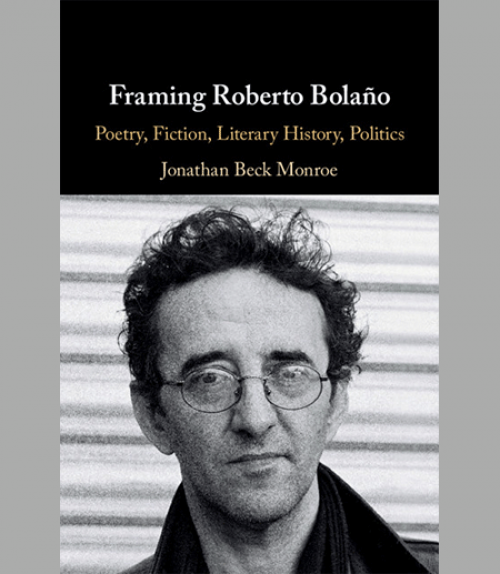